Pender was formed in 1875 from New Hanover. It was named in honor of General William D. Pender of Edgecombe, a Confederate soldier who was killed at the battle of Gettysburg. It is in the southeastern section of the State and is bounded by the Atlantic Ocean and New Hanover, Brunswick, Columbus, Bladen, Sampson, Duplin and Onslow counties. The present land area is 870.76 square miles and the 1990 population was 28,855.

The county commissioners were ordered to hold their first meeting at Rocky Point. The act provided for the establishment of the town of Cowan as the county seat. In 1877 an act was passed repealing that section of the law relative to the town, and another law was enacted whereby the qualified voters were to vote on the question of moving the county seat to South Washington or any other place which the majority of the voters designated. Whatever place was selected, the town should be called Stanford.

In 1879 Stanford was changed to Burgaw, which was by that law incorporated. It is the county seat.

This is a map of New Hanover County area that shows where Pender came from.
Contributed by Bill Vanlandingham 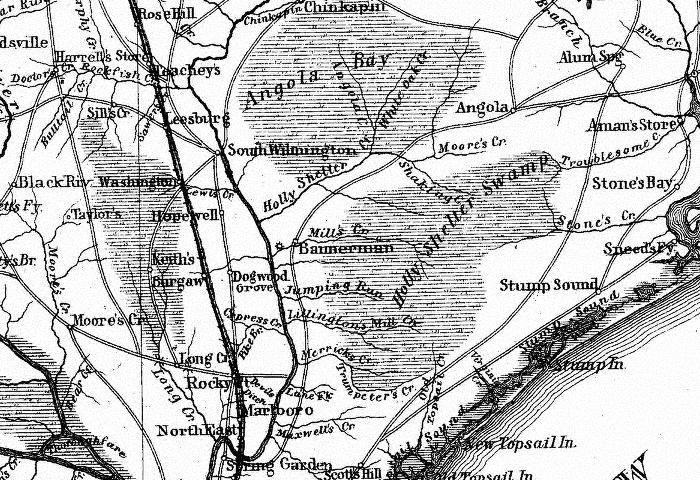 Back to Pender County Page